Revised guidelines for Labuan companies carrying out leasing business (including Islamic leasing business) in Labuan IBFC effective on 1 January 2019 was issued by the Labuan Financial Services Authority (“FSA”) on 5 March 2019. This Guidelines is not applicable for the underlying leasing transactions which are done for the purpose of facilitating the issuance of Sukuk Al-Ijarah. However, leasing structure structured by way of ijarah shall observe all the requirements of the Guidelines.

It is the business of letting or sub-letting property on hire for the purpose of the use of such property by the hirer, regardless whether the letting is with or without an option to purchase the property. “Property” may include plant, machinery, aircrafts, ships (on bare-boat basis) or other chattel, moveable or immovable.

Any person intending to undertake leasing business in Labuan IBFC may apply to Labuan FSA for approval.

Kensington Trust Labuan Limited is a licensed trust company in Labuan and is able to assist you with license applications, establishment and administration of your Labuan entities. 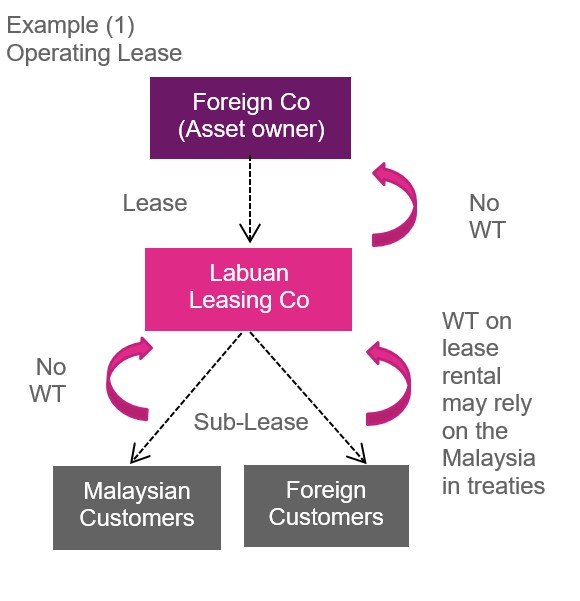 Notes to the above examples:

PRIOR APPROVAL REQUIRED FROM LABUAN FSA

NOTIFICATION TO LABUAN FSA WITHIN 30 DAYS

Fees are payable to Labuan FSA to undertake Labuan leasing business dealing with Malaysian resident and non-Malaysia resident. Annual licence fee is payable latest by 15 January of each year.

Section 2B (1A) of LBATA provides that a Labuan entity carrying on a Labuan business activity which fails to comply with the substance requirement for a basis period for a year of assessment shall be charged to tax at the rate of twenty four per cent (24%) upon its chargeable profits for that year of assessment.

All Labuan entities may conduct transactions with Residents of Malaysia in Ringgit Malaysia except for: